One of Charlie and my signature meals on the island is a cup of creamy New England clam chowder at Martha’s Vineyard Chowder Company alongside fries and a hard cider. 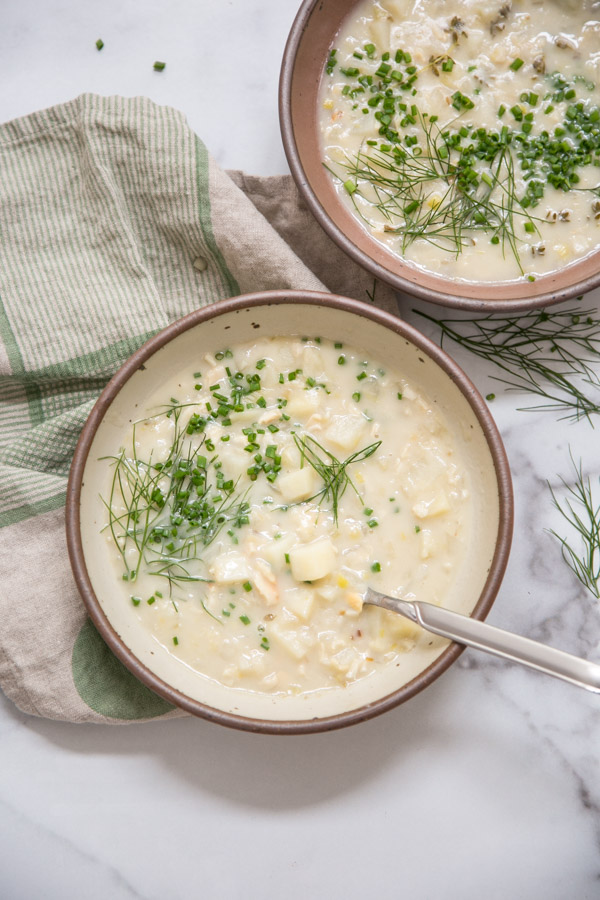 The restaurant itself is pretty standard sports bar fried seafood fare, but the chowder is actually the best you will ever eat. If you like a gloppy heavy broth, it might not be for you. But if you prefer flavor first and foremost, and a generous clam to potato ratio, it does not disappoint. Also, unlike most of its thick creamy cousins, this chowder is gluten-free. 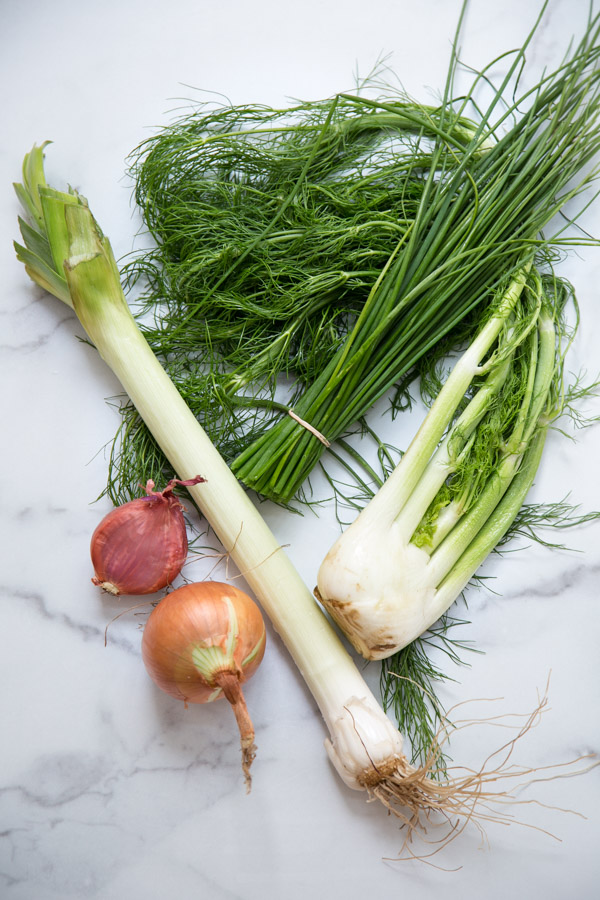 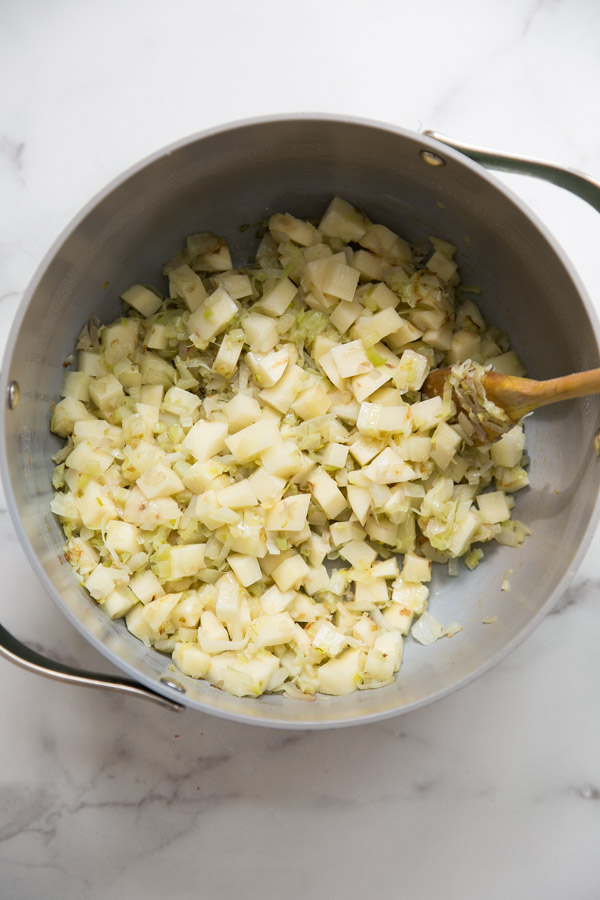 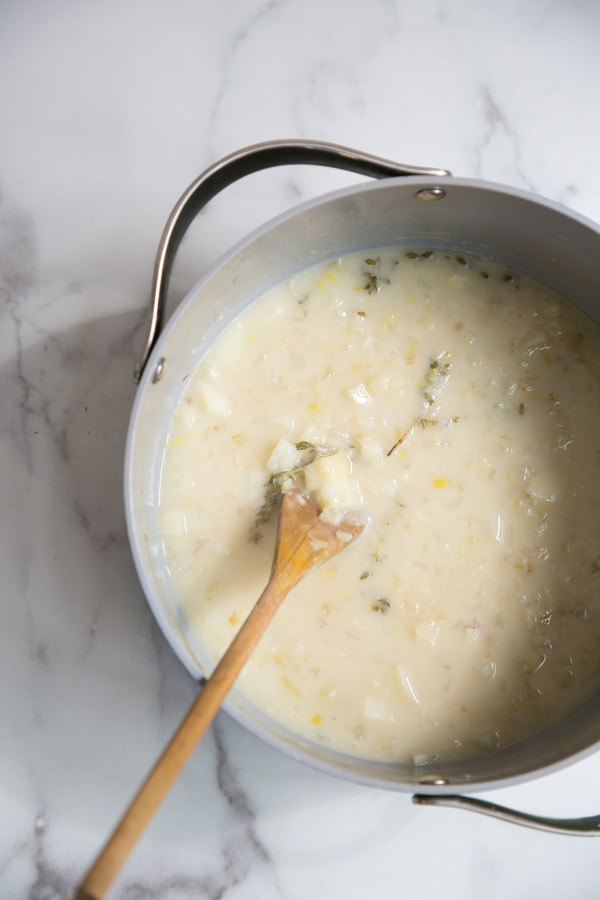 I’ve been meaning to recreate this homemade New England clam chowder for years, and have even gone so far as to call the restaurant multiple times to ask the ingredients. But they are sly devils and refused each time to reveal the secret recipe.

My expert opinion is that what makes it special is the addition of lots of different alliums and vegetables: the usual onion, along with celery, shallot, fennel, leek and lots of thyme. When you make this healthy chowder recipe, you may be surprised by the massive pile of veggies added to the pot. But it all melts down into the soup beautifully. 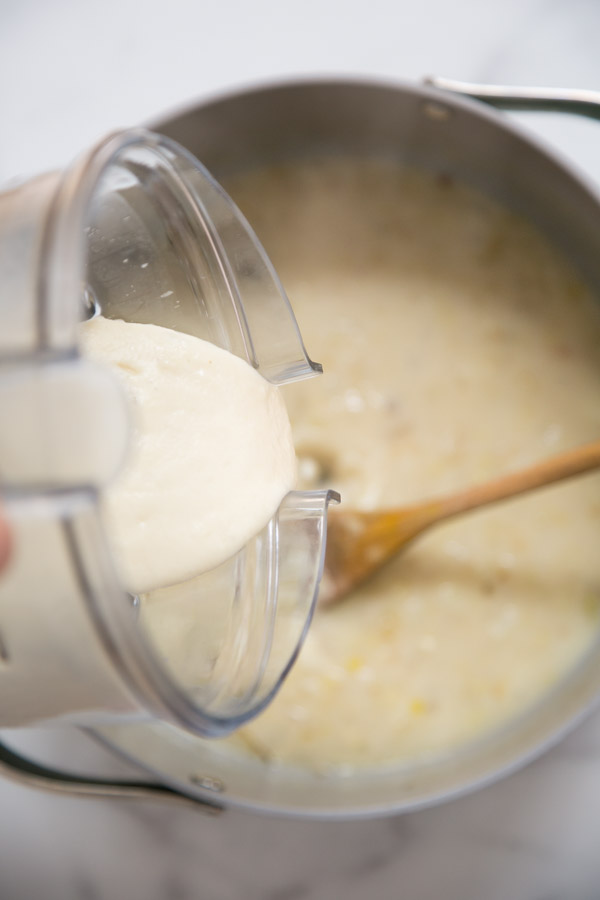 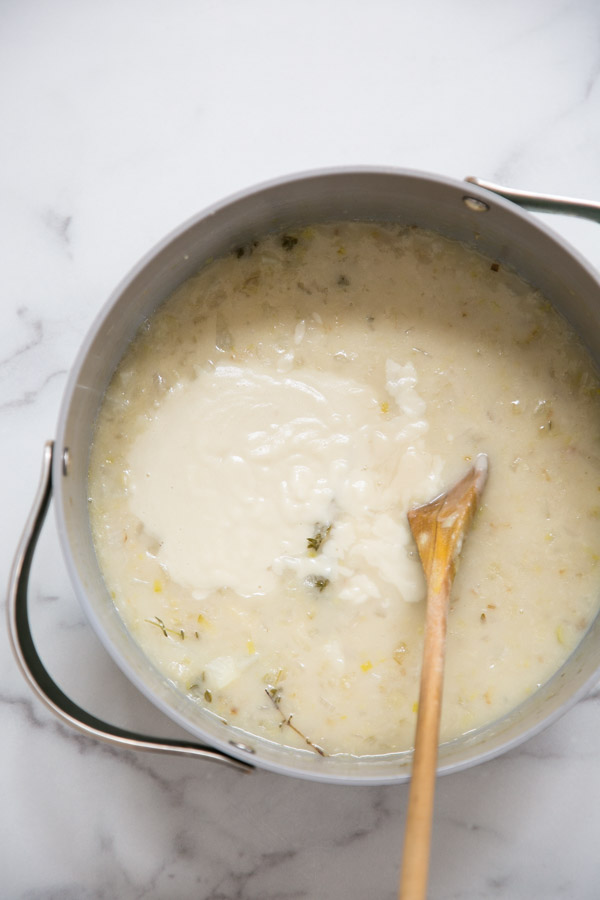 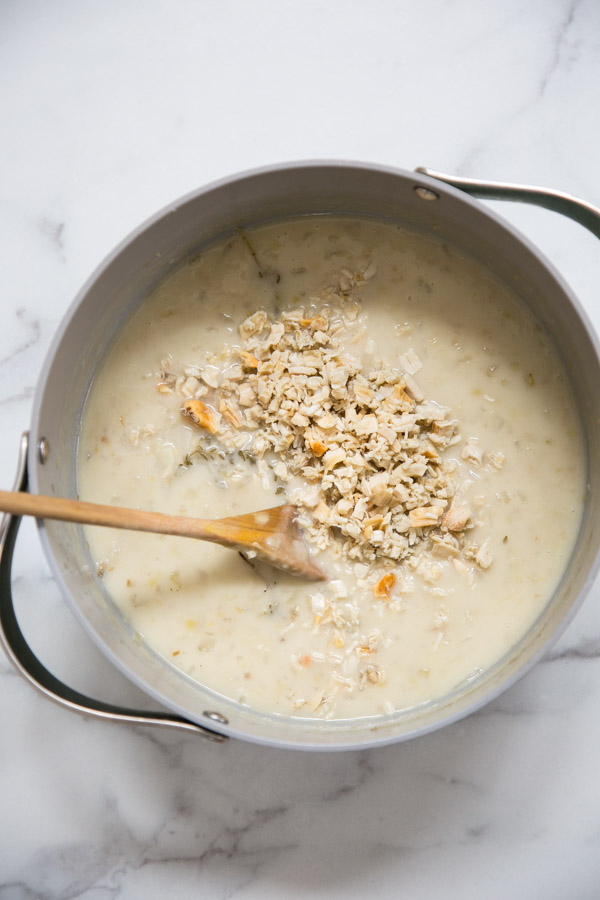 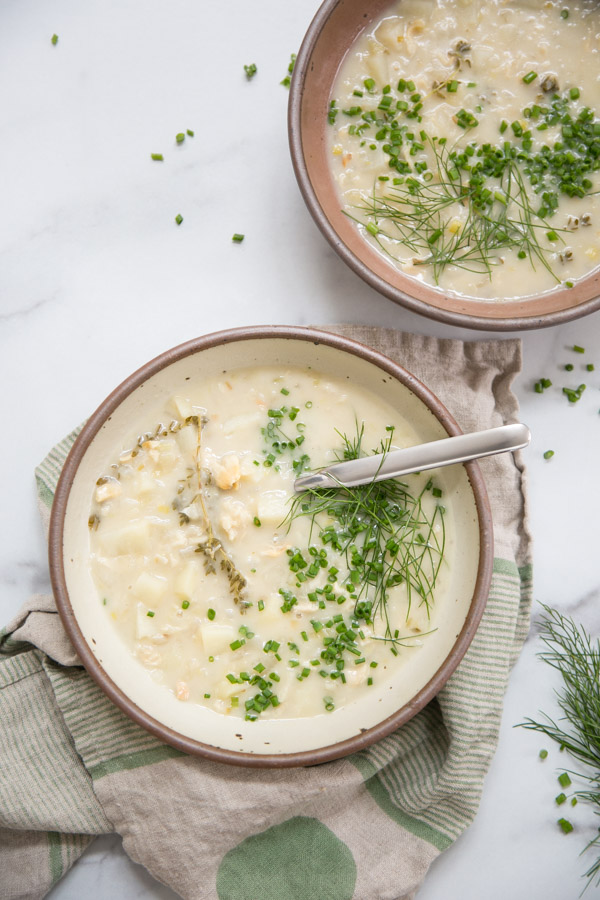 To make this dairy-free in addition to gluten-free, I subbed full-fat coconut milk for heavy cream. Since it tends to be a little thinner in texture, even with the starch of the potatoes, I added a little arrowroot starch to thicken it. You can omit this if you don’t have any on hand. Because the second healthy trick for thickening this New England clam chowder recipe is to simply puree a few cups of it (potatoes and all) and add it back into the pot. I picked up this idea from Gina Homolka in her recipe here.

If you’re someone who likes bacon in their chowder, you can easily start by browning two slices before adding the alliums to the pan. Remove it and  crumple the cooked bacon into the finished soup so it stays crispy. 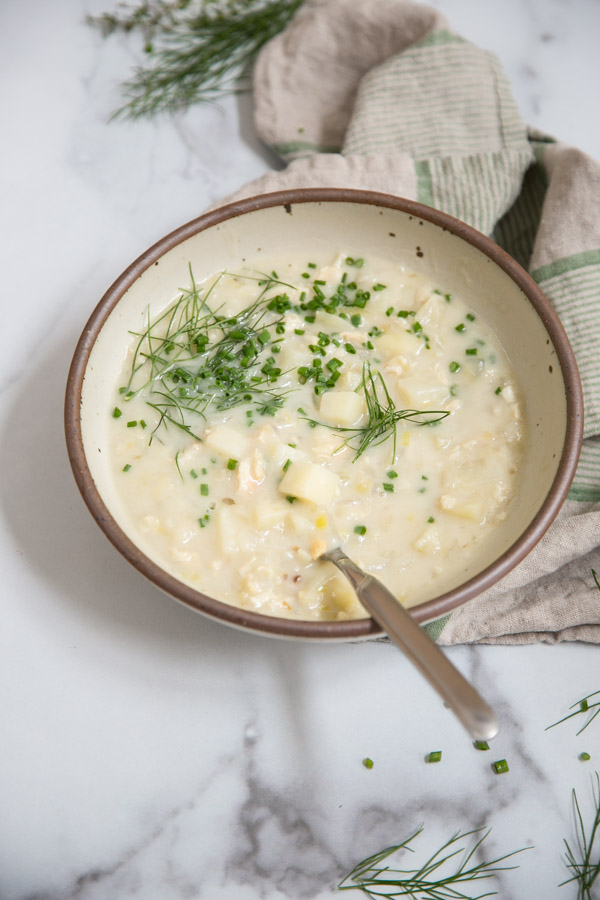 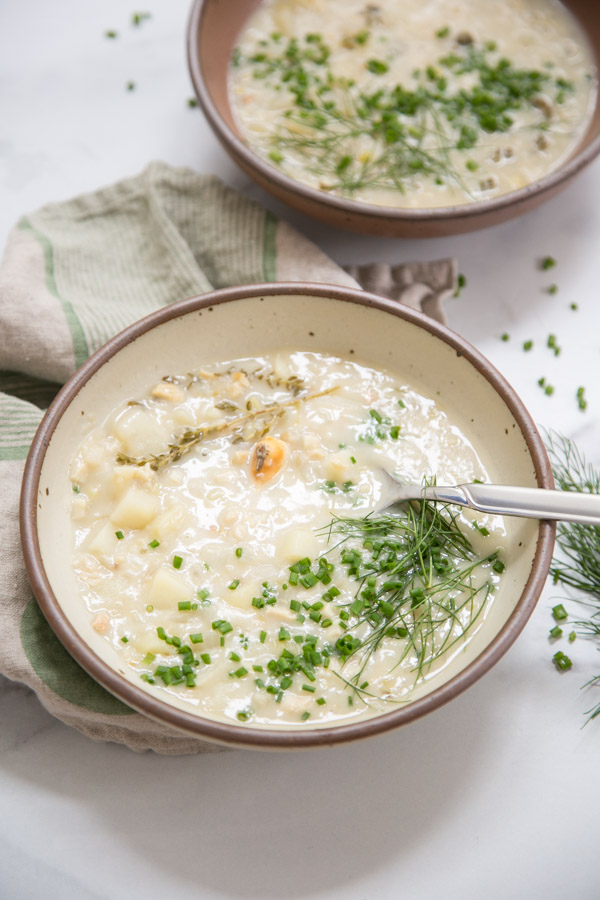 The easiest method for the clams is to simply use chopped canned clams. They also have a surprising amount of juices packed into each vessel, which you’ll want to take advantage of. My favorite way to do this is to simply open each can halfway and stream the juices directly into the pot when the clam juice is called for. Then just toss in the remaining clams later on so they don’t overcook.

Our beloved MV chowder company was closed for all of 2020, so we were left dreaming of their chowder for many dark months. This healthy clam chowder recipe will be a game changer should any natural disasters or global pandemics keep us from our favorite chowder. Or at the very least, when we are craving something similar without the cream.

With health and hedonism, 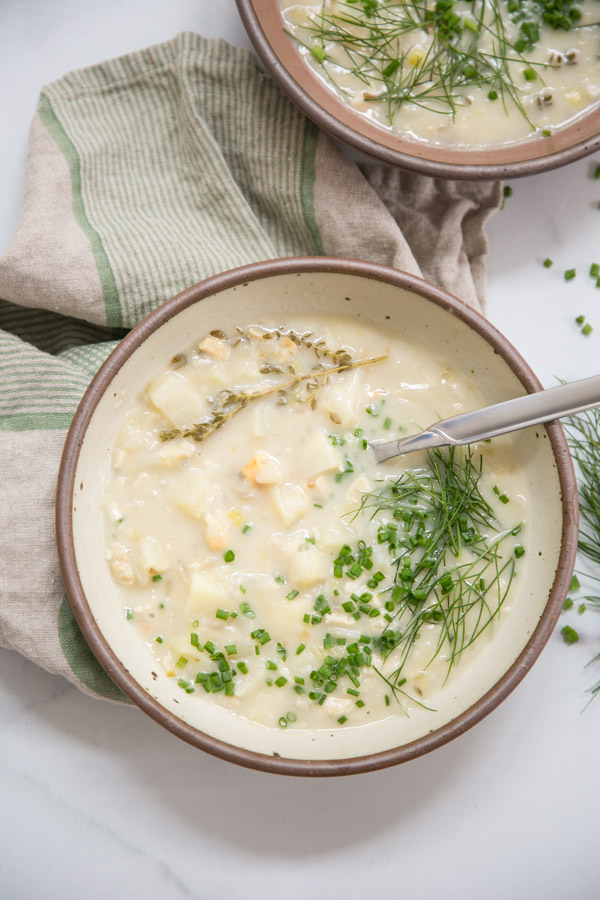 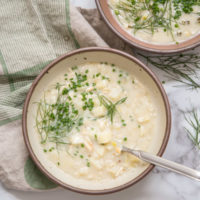 Healthy Clam Chowder with All the Alliums (Dairy-Free, Gluten-Free)

This healthy clam chowder is based on one of the all-time best chowders from MV Chowder Company on Martha’s Vineyard. What makes their version so good is that it’s packed with vegetables. I modified this version to make it dairy-free in addition to gluten-free.

The easiest way to use the juice from the canned clams is to open the cans halfway and allow the juices to stream directly into the pot.